PL510*Jeff said:
Car resides in Federal Way, so at some time, soon I hope, we'll be able to see it in person.
Click to expand...


Sinovac said:
I don't have a GTX1 but I am fascinated by the work you are doing and the quality of the workmanship. Truly impressive.
Click to expand...

Some of our newer members may not be aware of all the cool carbon fiber parts that Kip has developed for non-GTX-1 Ford GTs. Check out Kip's website and order your GT an early Christmas gift! All of Kip's parts are works of art. He is also a Forum sponsor.

Some of our newer members may not be aware of all the cool carbon fiber parts that Kip has developed for non-GTX-1 Ford GTs. Check out Kip's website and order your GT an early Christmas gift! All of Kip's parts are works of art. He is also a Forum sponsor.

Just checking in to see if there has been any good progress pictures!

Finally back on the Forum to respond.
Been hammered at the shop lately....

The seal patterns are finished. What a job...

I am off to Haiti on Thursday for 10 days to help with reconstruction efforts.
I am having my crew progress the tools while I am out.


roketman said:
Wow is all I can say ! The design looks sweet .Your talent is so very impressive!!!
Thank you for sharing!
Click to expand...

I really appreciate all the compliments from everyone.
Half the reason I do this stuff is for the creative fulfillment.
It's nice to know people dig it.

Kip Ewing said:
Not to mention his last name is one of those hyphenated British surnames.
It's actually Bill Care Skilled-Knobloch.

I understand that the Skilled is silent and not actually pronounced.

Funny. Careful with those solvents.:slap

Kip Ewing said:
I really appreciate all the compliments from everyone.
Half the reason I do this stuff is for the creative fulfillment.
It's nice to know people dig it.
Click to expand...

Kip what's the other Half?

Seriously wonderful work you've done on the GTX1, and the other projects too.

It is a real education to all of us here on the Forum, when you get into the bolts and nuts of what and how you have approached and solved the Problem of the Day. Or night in your case.

The technical reasons for doing such and such, certainly provides we GT owners with a better understanding, and appreciation, of what went into our cars by the Design Team.

"Again, there is no point in inventing a solution to a problem someone has solved with more resources." - Kip

The design/engineering you've applied to that top is way ABOVE first rate. :thumbsup:thumbsup
K

Thanks for sharing this build process. It provides a real appreciation for the efforts required to create a great finished product. :cheers

Kip, you look sooooo serious. It's good to see your face. When are you coming west again? Would love to meet for lunch or dinner again.

Sounds like a fun and worthwhile project Have Fun!!!

Kip Ewing said:
Not to mention his last name is one of those hyphenated British surnames.
It's actually Bill Care Skilled-Knobloch.

I understand that the Skilled is silent and not actually pronounced.

What a wonderful compliment; thank you

I just want boring, normal doors, like the ones on this mule Mr. Shelby is discussing with Mr. Hannemann.

Now for the window, and some other cool stuff.

Every time one of my design or fabricator buddies comes over to the shop the question about the GTX1 is "What are you going to do for a rear window?".

The concept car was supposed to have just a flat plane of glass, but it never got fabricated correctly. After getting into this car, it was clear that sealing was going to be tough, if we did go with just a flat plane of glass. The final straw was when a hot rod builder friend (Bill Jagenow of Brother's Customs) said "It would be too easy to just do a flat plane of glass." I take that as a dare, so no flate planes of glass...
Having my buddy Larry Erickson (of Cadzilla and Alumacoupe fame) come over to bless the design direction gave confidence too.

The more observant readers of this post will have noticed a blue fine line tape line in prior photos of the roof. This was "thinking in progress" for how I eventually changed the profile of the roof, to not have to just have a flat plane of glass.

After some pretty major surgery on the roof pattern, we came up with a pretty cool way of exectuting the rear window.

I wanted to bring the window all the way back to the joint at the clamshell.
This would allow for the rear window to essentially be shingled. Any water running off the window would get directed back to the clamshell and drain out past the sides of the seal.
Here's a photo of the mock-up, before we modified the roof pattern. 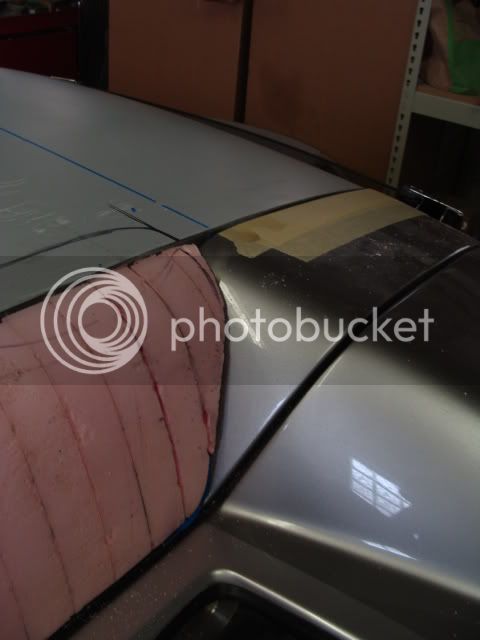 Once I was satisfied with the concept, I then started to make the window pattern while one of my crew started to modify the roof.
We need a consistent margin around the rear window structure to allow for some volume for the seal. We accomplish this with "sheet wax". This wax comes in calibrated thicknesses and is adhesive-backed. If you need to change the surface of a pattern by some measured thickness, you cover the area with the required thickness of wax. In this case, we are allowing for a 0.25" seal gap. 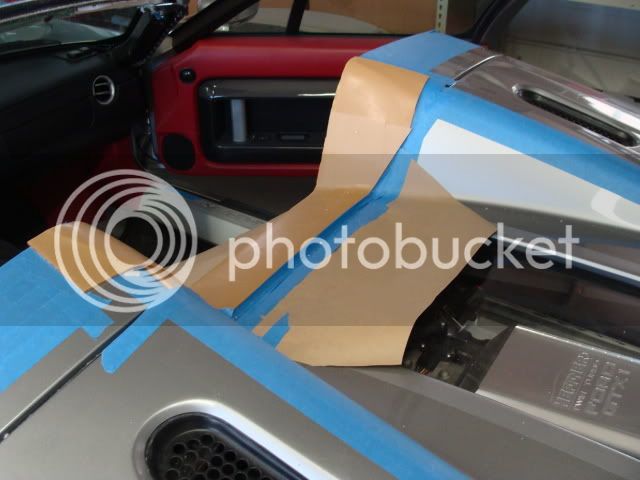 For the rear window pattern, I started with a substrait made up of "Home Depot" grade insulation foam. This stuff works fine for this sort of work. If we were making a precision model out of foam, we'd use urethane foam. We form the substrait to be smaller than the desired final shape. To match the surface of the window model we "squeeze" body filler between the foam substrait and the sheet wax. This gives us a form that is exactly 0.25" off the surface of the bodywork. 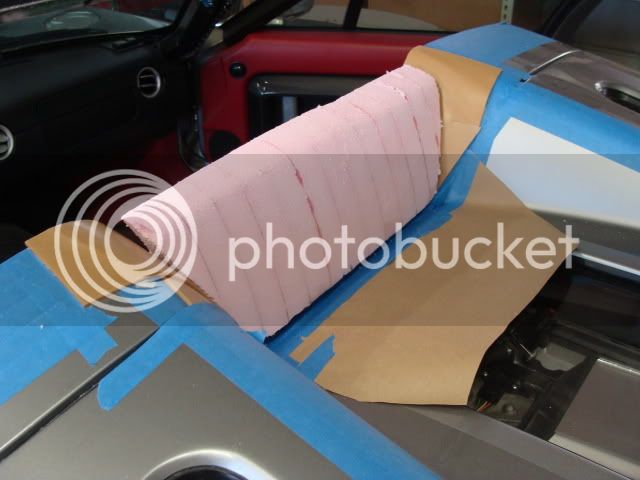 After matching the surface, we build up body filler on what will be the window surface and sculpt that to shape.

Now, I didn't take a lot of photos along the way (it was just a ton of noise and dust anyway) but here is what we ended up with. 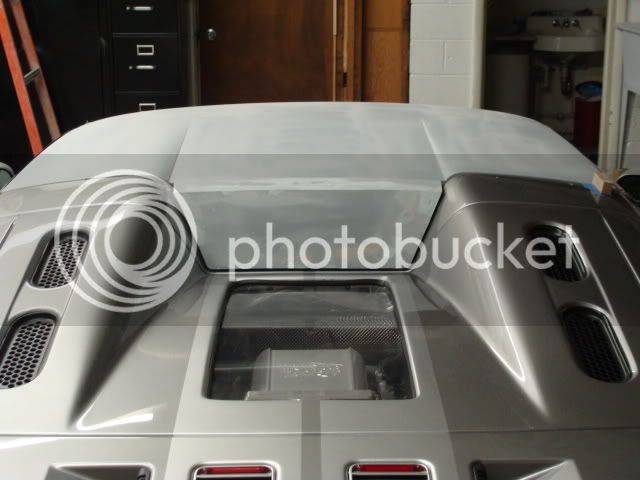 Essentially, we sculpted the form of the head fairings to flow into the roof.
This allows us to resolve the surface of the rear window. 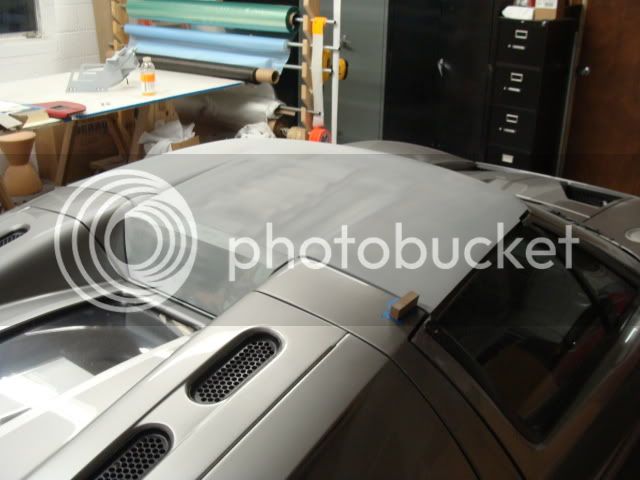 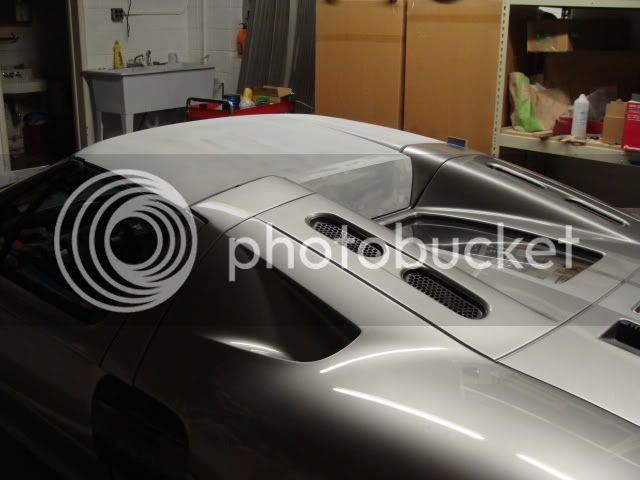 Right now the rear window looks pretty "square" in section. The radius is the last thing you model.

I've had a number of people express interest in having us do a GTX1 conversion.

We are ready to do it. Just a matter of who is first.


Cyclenirvana said:
Kip,
I think there may be quite a few of us who in the long term would like to take a non-modified GT (as opposed to a GTX-1) with the original body lines intact and convert it to a convertible. As you mentioned this would involve making the doors normal, which I don't have a problem with...it was cool at first, but now it is mostly a pain. Keep us up to date.
Fantastic work...I look forward to seeing more.
Scott
Click to expand...

Anything is possible Ralphie.
Send that car over, and we will hook you up!


HeritageBruce said:
Same here. I prefer to keep the roof intact and at least physicologically I'd feel the car is stiffer. If the top portion of the doors can be cut-off and made into a removable mini t-top type panels that snap into the existing roof openings, we'd get a Smoky and the Bandit t-top while making ingress and egress easier, I'd be all over this mod. I still have fond memories of my '79 Z28 (not quite Burt's Trans Am) w/ t-tops. :banana
Click to expand...

What I really would like to do is a coupe with the new roofline we did for the hard top.

We could convert the doors to be "normal", and re-skin the roof to look like the GTX1 hard top. I'd also change the clamshell to have the headfairing forms of the GTX1.
Essentially, it would look just like the GTX1, but the roof would not come off.

Could do the t-tops, but that would be a bit more work.