Summa you people just have faaaaaaaaar more neat toys than the law/society should allow! :rofl :thumbsup:thumbsup

Yes, this solution was a bit more than required to move coolant but I also wanted to improve the GTs "catch system" for air in the coolant. I suspect that several GTs get significant air bubbles in the system when the coolant boils and the current system doesn't do much to remove them. We are also adding the phenolic spacer changing the intercooler flow so it didn't seem like a big deal to add better outlets on the front and back of the block.
Last edited: Jan 31, 2012

Clamshell? ...plenty. It's the rear window glass that scares me.

It is going to PRI at the end of november. I doubt we will have the tuning finished on it then but it should be in one piece. I'll feel better if I can just sit in it and pretend to drive.

Hide the women and children!

I am a big fan of your project! Maybe I missed it somewhere, but have you posted any output numbers yet (even preliminary)? Hp/tq, boost level, etc. Must be impressive.

First:
We removed the front engine coolant ports where the water from the heads passes through the intake manifold. This is to make room for the new billet water necks that bypass the hotwater to prevent it from going through the intake. We also clearanced the intake for the rear water ports we are adding. As most of you remember, there are phenolic spacers with o-ring grooves that go between the head and the intake now. Isolating the intake from the conductive head of the head by way of the phenolic spacer and eliminating the hot water that passes through the intake... we've dramatically reduced the amount of heat that the intake would be subjected to. This in effect, will substantially reduce intake temperature increasing power potential and reducing detonation potential.

The GT as many of you know, has a non-conventional seal at the base of the injector. I personally think they are a poor design and do more harm than good, especially in regard to blocking airflow since the port has such large bosses to accommodate them. It is possible to remedy this though it would be a lot of work, we opted not to do so. Because there is not a traditional oring seal at the base, and because the injector sits so low in this pocket... we had to clearance the outside lip because the injector terminal for the 2000cc injectors sit so much lower than the 1000cc injectors or the stock injectors.

These 2000cc injectors are for a GT in Houston that is going to be running straight methanol with one of our mechanical systems... We wanted to go ahead and clearance Mark's so that if we wanted to go to Methanol for track events in the future with his GT, we wouldn't have to pull everything apart again and do this mod. 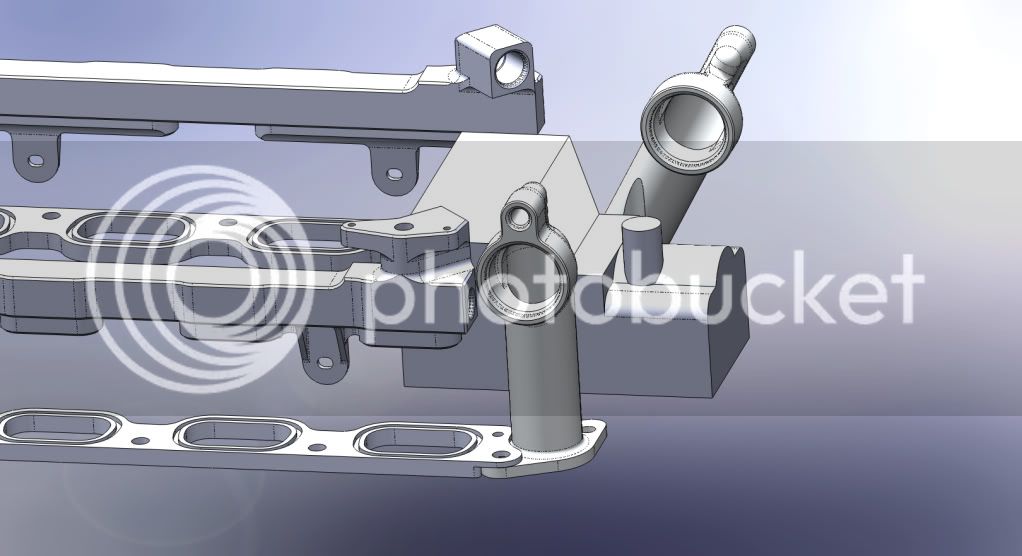 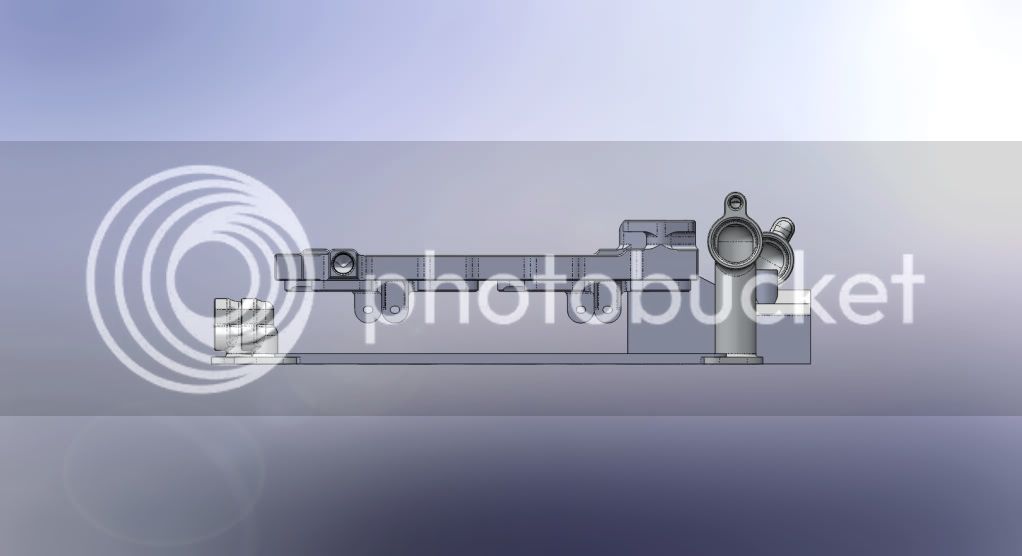 Here are some of the pieces... the closest set of billet rails are Mark's... currently it has the 1000cc injectors installed in them. His rails are Hard anodized on the inside to protect the aluminum from alcohol based fuels and then a standard type 2 clear anodizing on the outside so that they look like machined aluminum but have protection from oxidation.

The 2000cc injecotors are on the tray, one is assembled, the 15 other are sill apart.

The rails at the far end are for the Methanol GT in Houston, they are hard black anodized on the inside and bare on the outside. We'll be polishing the ouside for them and then machining the logo. We may or may not do a clear ceramic over them afterwards.

Keep in mind the intake is dirty, and hasn't been cleaned up since coming off the car or machining... it will have all sharp edges debured and sanded... it will then be hit with a scotch brite wheel to lightly polish it all up and smooth it out good. These are not finished images.... you're getting them in the middle of the modification right after machining. 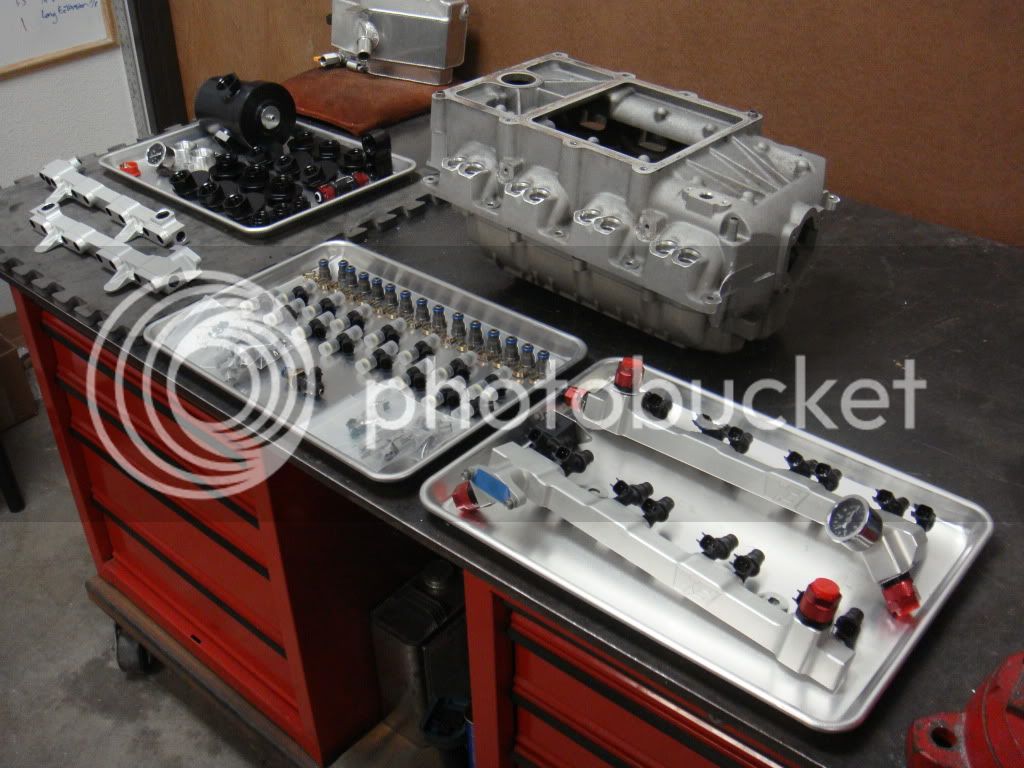 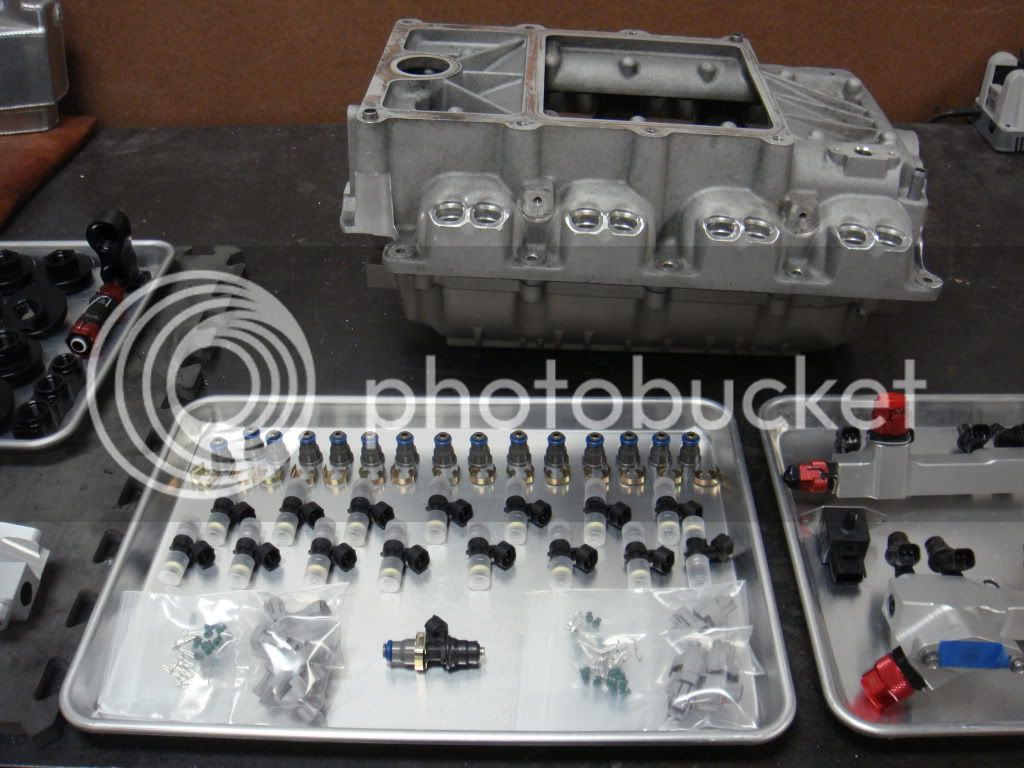 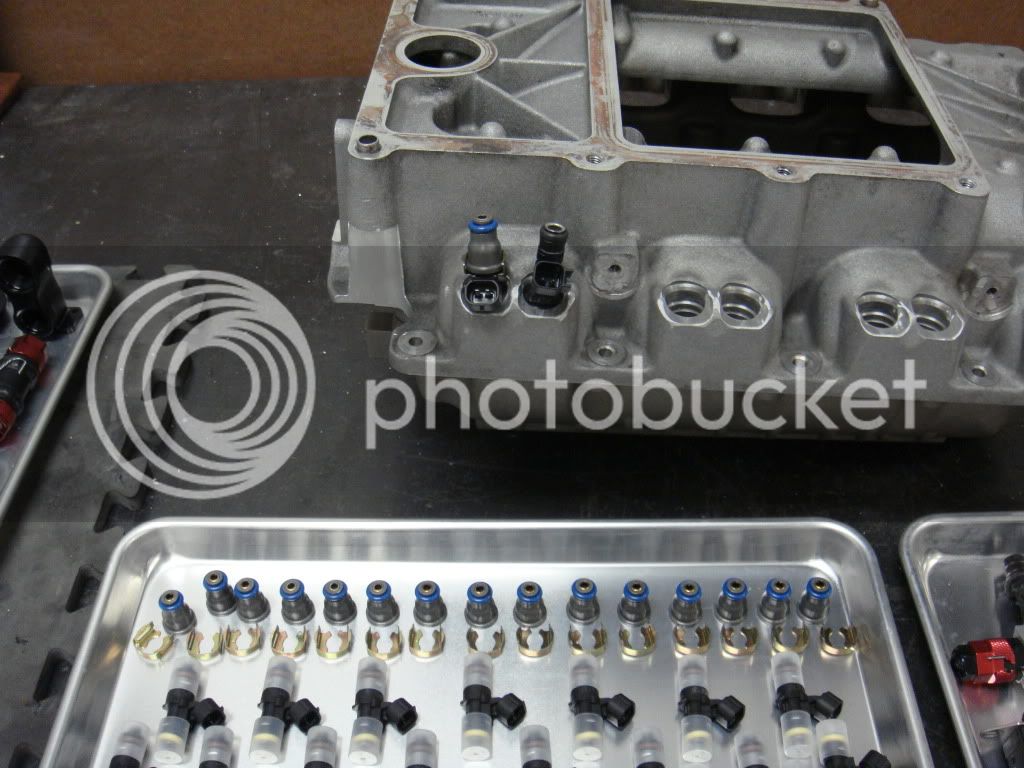 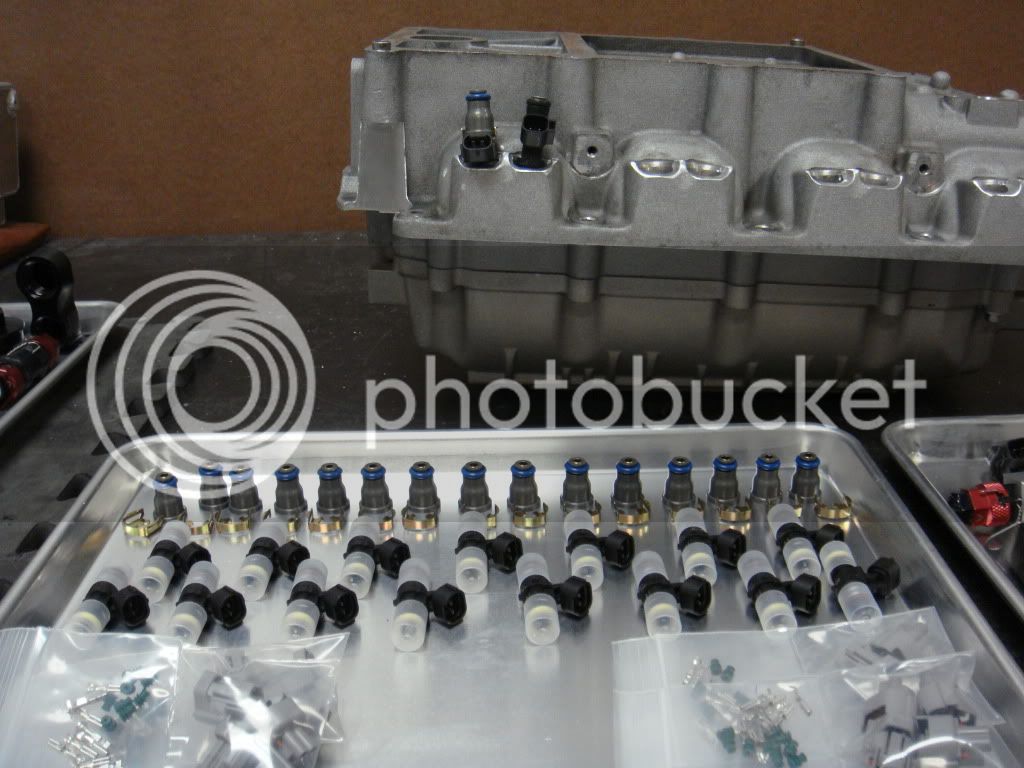 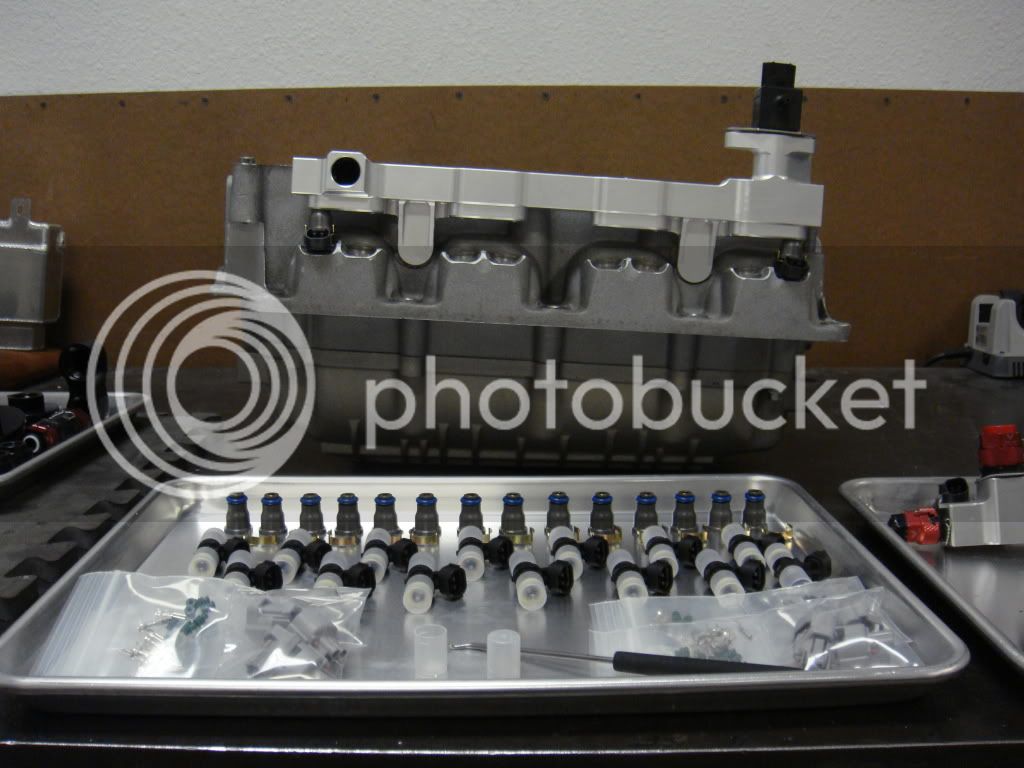 Apply for some funds on kick starter man !!! Get this thing done !! :biggrin
M

Sorry for the delayed response, been slammed.

The GT500 that made 1085 whp has a 3.4L Whipple with the "Crusher" inlet. Running right around 27psi on VP import for track events. 20 of course on the street. Did that with bottom end built and cams... NO head port work! Not yet anyway, it needs it. With the 2.5" exhaust.

Has our spare tire ice water tank and a 75 shot on it.

New changes are the 2" primaries, 3.5" collectors, and the 3" exhaust.
Our hot water bypass kit and intercooler / intake mod.

Our hidden 10pt cage, MoTeC, and Head work hopefully next.

That's always a fun thing to get in the mail!

Well we did some break-in dynos and noticed the car was miss-firing at lower rpms, we assume it has a bad coil but the exhaust gas temp sensors were not setup at the time so we couldn’t narrow it down to which cylinder. We were also running low on time with SEMA looming. The limited dyno information we gathered showed that around 5-6lbs of boost, at just 6k rpm, the car was north of 550hp... the hp power curve had not begun to level off so it is assume there is quite a bit left... that’s all we know for sure. It was making more power than I expected at low boost levels and conservative timing.

We literally finished up everything the days leading up to SEMA so we just havent gone back and done a full pump gas tune yet. The plan is to be on a dyno as soon as possible after the truck unloads the car in Dallas. After we make our first couple of 1,000 hp pulls, we go back and retorque the head bolts... then we go for broke. E85, Race fuels and finally a little laughing gas just so we can say “Go Baby, Go!”
Last edited: Nov 4, 2017

Alright, it took a really long time to find a 5-axis shop that was willing to take on this project at a price point that made sense. The 5-axis shops are used to government checks and F1 budgets. Here is the latest big item we received. Basically this item allows us to begin putting everything back together.

Build photos please! John is not big on taking a lot of pictures during an engine build but your project is of special interest here so perhaps you can bludgeon a few out of him. Keep the updates coming!

I think I mentioned that Fish puts everything together in CAD to test for part collision before anything is created IRL. This is one of the images that keeps me going when Mullet asks 'so when is it going to be done?'

BlackICE said:
Thanks, so "speed density" not MAF. I think the stock ECU can run Alpha N if the MAF fails.
Click to expand...

Sort of, but it's a fair amount more complex than a basic speed density system seen in 99% of oe and aftermarket ECUs. Using measured sensor values vs calculated theoretical values based off things like known throttle mass flow... the ECU moves between measured and calculated fueling strategies... the monkey on the keyboard then can determine when and where either is used... typically for spots where engine resonances might affect things like pressure transducers, etc...

I'm not sure what to call it but it is a good step past typical speed density.

Yes... Defaulting to a "limp" throttle based fueling strategy is pretty normal... most OEs incorporate this.