I wanted To replace the battery with the OEM battery but can’t find one from Ford. Any ideas on where to find one or a recommendation for a suitable aftermarket battery

Hgs911 said:
I wanted To replace the battery with the OEM battery but can’t find one from Ford. Any ideas on where to find one or a recommendation for a suitable aftermarket battery
Click to expand...

Ford should have them available . When you give them your VIN and they order one, a “Ford GT” Optima battery should arrive.

We ordered ours from the Local Ford Dealer. Now we just have to replace the gauges. Tack, Oil Pressure not working.
We checked the ground as everyone says check this first.

CampoLady said:
We ordered ours from the Local Ford Dealer. Now we just have to replace the gauges. Tack, Oil Pressure not working.
We checked the ground as everyone says check this first.
Click to expand...

I was having gauge problems and when I replaced my old battery with a fresh one last year all my gauges have been working great. Definitely always use a battery tender while storing your GT.
Reactions: Special K

If you don't need a Ford label on the battery an Optima labeled will be the same.

I’ve purchased Optima batteries from Summit Racing. Same part as the OEM, just not labeled as a Ford battery. Cheaper too.

When you order the battery from Ford, it is the same Optima battery. They send a Ford GT sticker with it. You can peel the sticker off the old one and put it on the new one.

Kicking an old topic but no reason to start another.

Replaced the battery in the Ford GT. Consignment guy has been really good about keeping it on a tender and called today and said the tender had an alert state that it wasn't keeping up. Called Ford. No batteries. The manufacturer (Optima) is on backorder, could be months. Well, the Ford battery is just an Optima #25 so I called around town. All of the Optima places, Ford (if they had one) including Amazon, wanted the same price so I trundled over to O'Reilly's and picked one up.

In retrospect I had a heads up that it was coming. When I took the car in for its annual emissions test, I noticed that the boost gauge wasn't working (a dreaded gauge failure?). After the test was done and I started it up again, the gauge was OK. So this was probably an early indicator that the battery was on its last leg.

I use the Cooltech battery tender config. That connects to the battery posts and leaves a tail under the hood area to make connection easy. So before pulling the battery I connected the Ford one to the power socket to (hopefully) keep all of the electronics powered. It worked! When I was done all of the emissions adaptives were still present so no drive cycle to reset for next year!

For those who do not care if their battery is not stickered with a FGT sticker, Braille battery makes an install-and-forget unit. The lithium battery does cost more but weighs SIGNIFANTLY less than a lead-acid or Optima cell-type battery. There are discussions on this Forum about this option. Give Gary a call and he can fill you in. 941-312-5047x401.
I have no financial interest in this company. Just have one of his batteries in my racecar and am very pleased with its performance.

I have a 06, do you have apart number/model?

I do not. But several GT owners here on the Forum have purchased these batteries which have the correct placement of the two poles for the cables. Gary knows which battery fits along with a plethora of other batter knowledge!

At the top of the window (at least on Windows) is a bar with a Search box. Try putting "braille battery" in it and you will be pointed to a number of topics, with this one being the most likely candidate


https://www.fordgtforum.com/forums/...-for-forum-members-through-august-2016.32510/
The cars and this forum have been around long enough that almost every question that can be asked, has been asked. Search can be your friend.

Thank you sir for the advice, I went right to gooooogale and I was not getting answers, I should have used the FGT forum search bar first!

Is the Optima Red Group size #25 top post battery the preferred replacement battery for the GT as per twobjshelbys?

If you want the OEM type,get the Optima 25. You can peel off the Ford GT sticker and reapply to the new one.
Last edited: Dec 31, 2019

Are you guys sure it’s group 25 and not group 35? I picked up a group 25 but when I started the swap I discovered the existing one to be group 35.

The original Ford battery is Group 25 and has a Ford label. If yours has an Optima labeled battery in it it was replaced with a Group 35.

The specs for them are the same except from the picture the terminals appear to be on opposite sides... Indeed, if you check these two pages the polarity swaps... 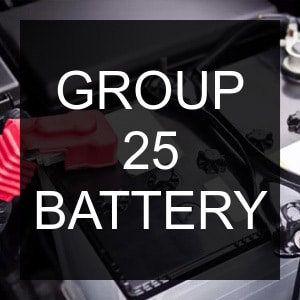 Searching for the Group 25 Battery? We have all technical information: Specifications, Dimensions, List of Equivalents, and Comparison with Alternatives

Searching for the Group 35 Battery? We have all technical information: Specifications, Dimensions, List of Equivalents, and Comparison with Alternatives