It will be a fun project. Enjoy it all over again.

Wow, what a find and it really looks good seeing that it has been out in the elements so long! Great story and will Charlie be surprised .

Awesome .... and looks like an easy project to get back in perfect shape again ......

I guess as we grow a bit older we start buying the stuff we loved when we were younger :facepalm::biggrin

.... this one just got into my garage :facepalm::lol 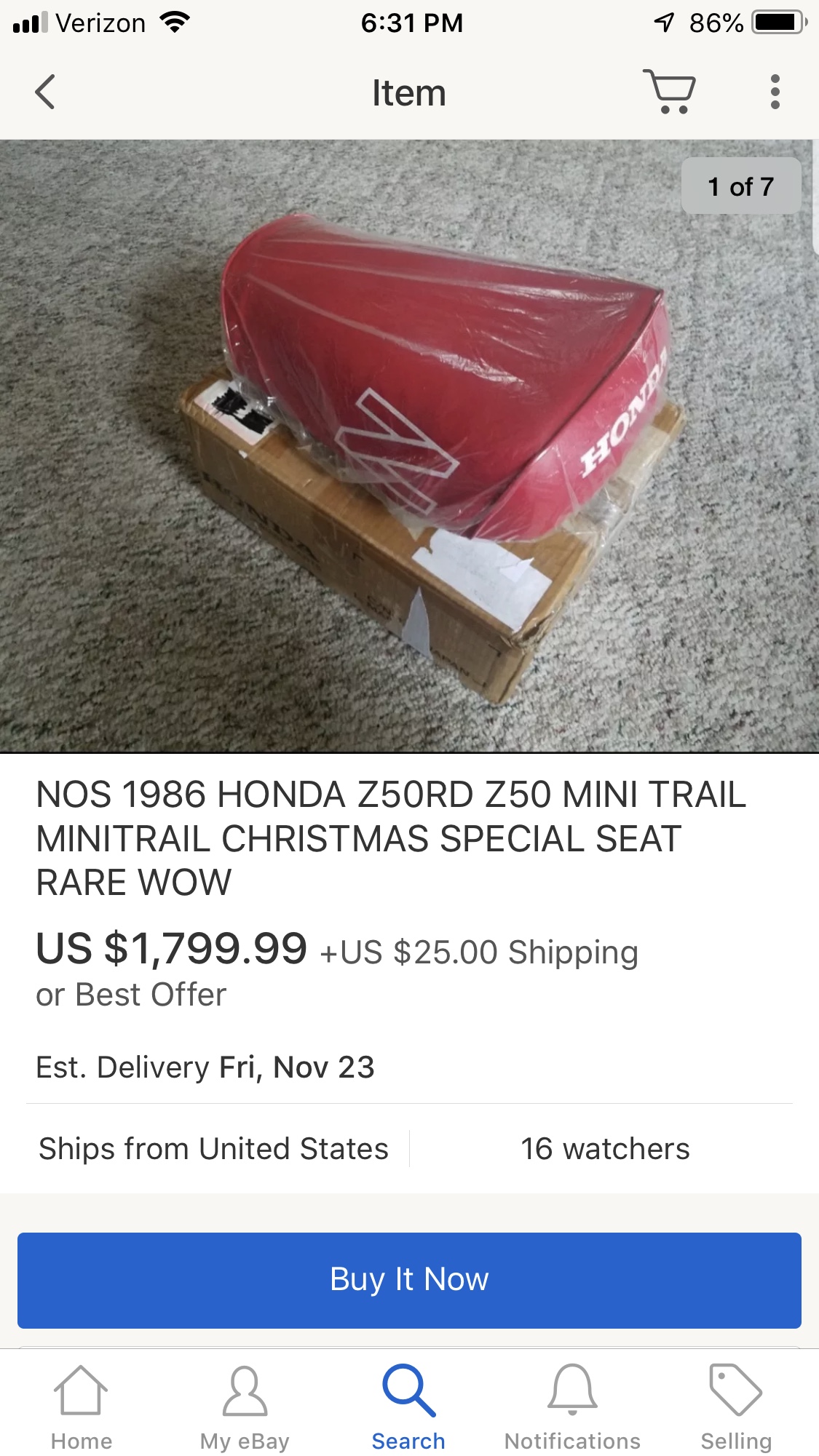 This is a super rare find, and the seller knows it!

Pound for pound, this makes a Ford GT seat seem like a bargain!!

Perhaps the best barn find car or motorcycle isn't the most unique, rare, or special vehicle. It may be one that has great significance to the finder. Everybody remembers their first car or motorcycle. It's not things mechanical that make a first car or bike special. It's where they take us between the ears. A flood of memories, people and events in our past, good times long forgotten rediscovered. A car or bike we owned decades ago can take us back in time.

Looking at old pictures of my son Charley on his 1996 Honda Z50 Mini Trail brought back great memories of Christmas morning 24 years ago. The bike weighed twice as much as my then 2 year son so I built training wheels for it and put a limiter on the throttle. Soon he was riding it all over the back yard. At age 4 the training wheels came off and he rode it till he was 6 when he graduated to a Honda XR-70 (which I still have). The last year the Mini Trail was produced was 1999 and it always bothered me that I sold Charley's first bike.

Those photos of young C4 on his Z50 had me wondering about where that bike is now. I didn't have the phone number of the guy I sold it to 20 years ago. He bought it for his then 4 year old son who would be 24 today. But I knew where his house was so I drove over to see if he still lived there. Two decades later and lo and behold, he answered the door! I had to explain who I was and then he remembered me. I asked whatever happened to the little bike and I was shocked when he told me it had been sitting out in the weather by his back fence for the last 15 years. It didn't run and was covered with dirt and leaves. He told me it wasn't worth fixing and he just never got around to throwing it out. I told him I'd like to buy it back but he said if I wanted it I could just have it!!!! I was so happy to get my son's very first motorcycle back! I hauled it home and it's in my garage and out of the weather. It looked pretty sad and neglected, but like the Charlie Brown Christmas Tree it was special and just needed some attention. I'm thrilled to have my son's first motorcycle in my garage again. I've already ordered $600 worth of new parts and by the time I'm done it will look just like it did on that Christmas morning 24 years ago.

Love this post, and can SO relate. Tried EVERY avenue to locate my dad's '56 Chevy to no avail.

You are really fortunate to have recovered a great memory. Now if you could only find those training wheels! :lol

That is unbelievable that you were able to get that back. Little did that guy know, he could have made a small fortune on you!lol

Would be awesome to have an enclosed show case built for it once you finish. Maybe double as some kind of table or under a bar. Be a time capsule to hand down to his kids and so on.

So, since I am restoring the bike as a 'survivor', I am keeping the original seat. No tears or cuts but the perimeter chrome trim is scuffed.

I bought the 'stock' that Honda had on aluminum brake levers , clutch levers , engine covers. tail light lens, foot pegs etc still in the Honda plastic bags.
Most all else is original but not perfect due to 55,000 miles on the ODO.
Thanks again for your advice.
andy (ajb)

Over the top - cheers Chip!
N

Great story and project,, Thanks for sharing.

After work today I started tearing down the little Z50. First I photographed every detail of the bike so I’ll know how to reassemble it. Then I power washed away a decade of dirt, oil, and spiderwebs before removing the fenders and seat. It’s going to take a while to assess everything it needs and assemble the necessary parts, some of which are no longer available so I’ll need to search eBay and other sites. I really enjoy projects like this. Charley is 6000 miles away in Uruguay but this brings him back home a bit.

Whhhat??? You have to love AZ. That bike looks brand new still. Leave something outside in MA for 15 years?? Looks a little different....

That’s awesome. My son Garrett’s first bike was the same Honda Z50. Last year he found another just like his old one and restored it himself. He takes great pleasure in at least having a twin to his actual bike sitting in his garage.

The first of a boatload of new parts have arrived for this project. When finished I will have invested many multiples of this bikes monetary value! Just like most of my other projects.