Curiosity killed the cat. Randy, you are falling down on the job. Where are the good looking women?
Reactions: Ed Sims and Roadtrip

Haha. Just had the fun of participating in four car related events in the last 3 consecutive weekend days. Like a mini rally!

Part time job in itself just keeping the bicyclists, kids, adults, and strollers from snapping off a mirror inadvertently.

Of course, one of our GT brothers today had a random Tequila company literally set up a branded EZ-UP a couple feet behind his car for an impromptu commercial shoot. LOL.

At the Sat night show, I was with a GT Owner, and a woman asked us to move away from his car so that she could take her selfie with friends. LOL! The savagery!

Wouldn't trade it for anything. NFGT still creating excitement like few things else 4 years into the production run!

I did have a professional fire performer photo shoot on Saturday before the car show, but I followed the safety rules and kept the Heritage a couple cities away and safe from Open Flames!

Today we were at Supercars by the Sea and also caught and displayed at the tail end of a huge 1,000 muscle car cruise. 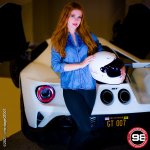 More fire to you Frank!

Ha ha, have you got her phone number? We are planning a birthday party for Special Ed.
Reactions: Copenhagen GT and Ed Sims

Break-in miles complete, first dealer oil change complete. Back to hanging with the cool kids. Pagani Huayra Roadster parked next to me.

Sometimes life gets in the way.

Yunni is a car enthusiast and fashion model. She maintains and drives a Mazda Miata, Porsche Cayman GTS, and newly acquired FJ Cruiser.

She wanted to do some blogs on the Ford GTs.

fjpikul said:
Ha ha, have you got her phone number? We are planning a birthday party for Special Ed.
Click to expand...

Is it a surprise party?

Looks like the cat is alive and well. Meet Winston. His owner apparently trained him to pose.

At the Cars in the Canyon show at the Yanks Air Museum in Chino, CA. 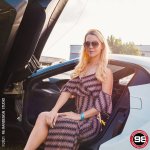 SYCO GT said:
Looks like the cat is alive and well. Meet Winston. His owner apparently trained him to pose.

Cars in the Canyon Show was held at the Yanks Air Museum in Chino, California.

Approaching almost a year since initial delivery of this incredible car. Driving to the Arizona Ford GT Rally in the car was a fun trip for sure! Who says you can't road trip across states in a street legal endurance race car? More relaxing than 24 Hours at LeMans for sure.

I also have been enjoying local shows too, with as wide a variety as possible. The big shows are fun, but I also enjoy the smaller enthusiast oriented shows just as much, perhaps even more. No need to watch as beach going cyclists ride their bikes between show cars, people about to lean up with dangling purses, belts and cameras. LOL.

Last night, I took my older son and the Heritage out to a JDM type meet, with a heavier focus on Japanese Domestic Market cars. There was one other domestic sportscar, a C7 Corvette, but otherwise all foreign and european makes and models. Recently, test drove a Civic Type R with my son, and it was really fun. I've never owned a Japanese Sportscar, all Fords, Domestic and European builds for me. (And a 70's Pontiac GTO).

Friendly crowd showed genuine interest in the car. None of the occasional ignorant or passively hostile questions, just a genuine desire to appreciate and learn about the car and Ford program, as far as I could sense.

And the owner of a CAD Design and 3D Fabrication company, was intrigued by the high quality fit and finish of the bare carbon hood. He even offered my son the chance to drive his modified GR Supra 3.0. He gave a thrilling ride instead. Note that he designed his livery with asymmetrical influence/execution as well with the blue accents/stripes.

So, fun to take these cars into different places, where they might not normally be seen. Five years later, and people still have never seen a modern NFGT in person. It's fun to change that, one person at a time.

If I ever write my story it could almost be a copy paste of yours. It truly is an extraordinary experience we have gotten by getting into the Ford GT Forum group of great people

FYI, I just saw today that there are neat Ford GT98 T-Shirts available on the Ford Collection website. I have never seen these before. Much of the Heritage 98 gear seems to have been long gone, but that would be great if more becomes available or the former stuff is supplied again.

I quickly ordered one for me and my older son. The sizes that remain are rapidly disappearing! Also there is a nice Ford GT baseball caps in black with a silver logo.