So you didn't request it as your first choice and you were slotted for one?

Thought its worth mentioning the first victory for a Ford GT came at the 1965 Daytona Continental.
It was still only a 12 hour race then, and as in 1966 also driven by Ken Miles and Lloyd Ruby.

This could also be a consideration for a heritage livery.
A first win is a milestone non the less.

Oufan2929 said:
I've been offered one... I'm also blown away at this spec!! I was dead set on a pts car. Am I crazy for still being torn? I think I may just have to step up and do this heritage car.
Click to expand...

Some guys have all the luck!

To answer your question, though, yes you're crazy. This is the best one yet .. although I love the red '18 Heritage also .. maybe a tie. Not sure.
O

DBK said:
So you didn't request it as your first choice and you were slotted for one?
Click to expand...

Well, a heritage car wasn't available when I began the beginning stages of the ordering process (February). I said my preference was for a heritage car and they said the timing might work out (covid really slowed things down). In the mean time I was considering other options and waiting on one of one color swatches. I had received one swatch and waiting on the second when I got the letter stating I have been selected for a heritage car. I didn't know how I felt about the side profile they teased us with weeks ago. But after digesting the video that came out Sunday and talking with concierge... Man, I'm getting really excited about the heritage and grateful for the opportunity!
Reactions: Ed Sims, 06VistaBlueGT and extrap

My friend is hard at it the day of the reveal and looks like he hit it on the head. I ask him if he might be interested in offering his version to forum members that are allocated.

Stef said:
Thought its worth mentioning the first victory for a Ford GT came at the 1965 Daytona Continental.
It was still only a 12 hour race then, and as in 1966 also driven by Ken Miles and Lloyd Ruby.

This could also be a consideration for a heritage livery.
A first win is a milestone non the less.
Click to expand...

That is GT103, the oldest GT40 in existence. Once it was finished being run by Shelby, it was sold to a good friend, William Wonder. He campaigned it for many years in the late 60s into the 70s. Bill repainted it a maroon color and had is name added to the side. Just below the window. He held onto it until late 2004/early 2005 when it was obtained by Symbolic Motor cars. They restored it to its Daytona winning livery #73 Guardsman Blue/white stripe color. Then it was auctioned off by RM (if I recall). I think it was bought by the Miller organization (Larry H Miller) and it now resides in the Shelby Museum in Boulder, Colorado. I'm going off of memory so I apologise if anything is wrong.

Bear with me, if you mind. a little storytime if it's okay. This car, in particular has a VERY special meaning for me. Bill lives not more than 20 minutes from me and I met him at the Ross Myers Day on the Farm picnic. A great day where Ross brings his cars out and invites the members of the DelVal region of the AACA to bring their cars for his employees to view while having a fun family day with food and festivities. I go as my father & mom are member in the AACA. So, that day in 2002 while there (I was 26) I heard this LOUD roar and wondered what it was! Well, my jaw literally dropped when in pulls a maroon GT40!!

Went over to photograph it, and just spend almost all day around it just looking it over. And taking it in. Talked to Bill (not knowing him at the time) and he told me all about it). When the day ended, my father (in his Model A roadster) tells me, "that man, with the GT40, he grew up with your grandfather" (my dad's dad, who died well before I was born). That was a shock.

So fast forward the next year (2003) we went over to see Bill's collection. If you know Bill, his motto is "if the blinds are up (on his garage door) come on in. If not, come back again". Bill has and amazing collection of cars (if you know you know, lol). And the GT40 was one of them. When we visited him that day, he showed us around his shop, and all the cars, and in the corner was the GT40. He asked, "want to sit it in"? I so so so badly wanted to, but at this time, it was late in October when we went, I had just had my liver transplant I was in dying need of on October 7th, so I had about 80 staples holding my entire midsection together. So sadly, folding myself up into that car wasn't a good idea (I'm 6" and at the time, 170 lbs, but more due to swelling and water retention).

But seeing the car again was a dream. And Bill is such an amazing ambassador of the GT40. I miss seeing that car and always kick myself for not sitting in it. If Ford were to make the very last Heritage livery of the very first winning livery, that would be an amazing way to end a program!! I hope they do it! And I know Bill & his son would love it!!! Sorry to ramble on everyone. This particular car and Bill are special to me.

Stories? So, about 30 years ago, we started a car club, The Shelby Cobra Association of Texas. Artist and best friend of Shelby's, Bill Neale, was a member (and we didn't know those two connections for about 3 months). Shortly after we decided to start the club in earnest, Bill helped set up a cruise and club car show at Shelby's Chili Factory in McKinney. About 20 of us went up and spent the afternoon messing around in Shelby's personal car collection...including the number one 260 Cobra, the first one, his Daytona Coupe, KR and all the others. I remember being awed that the Daytona was worth 150-200k. We all "squeezed" into it (it is shockingly tight and small) plus the Cobra and all. Everything seems like it smelled like chili powder. Two or three folks had tools and worked on some of the cars to make them run or idle. Pretty typical messing with all the old turds back in the day, if they were running, you could bet they were getting ready to need some help. In hindsight, incredibly special. In the day, incredibly special but "normal." All of the Shelby folks and high performance Ford folks have turned into our best friends. Something special about Shelby and Ford. Utterly breaks down socio-economic, job, and interests into something special that everyone treasures.
Reactions: Ed Sims, ch_petrolhead, Stef and 7 others

I was lucky to get a 2018 Red Heritage. Love my car. I however do have a small connection with the #98 1966 Daytona winning GT40. Lloyd Ruby was from my hometown, Wichita Falls, Texas. He raced the Indy 500 eighteen times but was beset by bad luck and never won the race. He was regarded by some folks as “the greatest driver to never win the Indy 500”.
He raced with Ken Miles and won the 2000 km Daytona Continental in ‘65. He teamed up with Miles to win the Daytona 24hrs and Sebring in ‘66. He missed the ‘66 Le Mans 24 due to back injuries from a plane crash. Hence Miles’ teammate was Hulme.
In 1967 Ruby was teamed up with Hulme in the dark blue #4 Mk IV for Le Mans. The car unfortunately got beached in the sand trap at Mulsanne corner.
In 2006 there was a parade and naming of a highway overpass in my hometown, in Lloyd Ruby’s honor. Nardo Chris, myself, and a few others attended with our 2005/06 FGT’s. Lloyd signed the inside of my car’s front bonnet. Other ex-racers attending included the Unser brothers, Parnelli Jones, and Johnny Rutherford.
Ruby passed away in 2009 but I’ve remained in contact with his daughter. 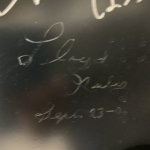 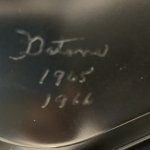 Great story. How fun is that?! I learned a long time ago that my “burning rubber” stories might pale in comparison to the guy you just met sitting across the table from you; I learned it the hard way one day at a picnic telling about the old street racing days. This fellow said he didn’t much have a need for speed anymore. Then I later figured out he had raced Lemans 3 times...
Reactions: Stef, SYCO GT and THamonGT

Back when you had hair, huh? Don't give up your day job to be a photographer.
Reactions: Roadtrip and ByeEnzo

I’m only 63.5 miles from Daytona. I’m also on the waiting list for one. I can only hope.
If I am selected for one

, You can bet it will be making a lot of trips to Daytona.
Reactions: extrap

fordgt6 said:
I’m only 63.5 miles from Daytona. I’m also on the waiting list for one. I can only hope.
If I am selected for one

, You can bet it will be making a lot of trips to Daytona.
Click to expand...

I'm 2 hrs from Daytona .. I'll come ogle and be a groupie

I also have a May 1966 Road and Track magazine that Lloyd Ruby signed. There’s a couple of ads with the #98 car. Classified ad in the back for a 250 GTO for 9 grand 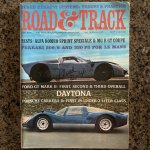 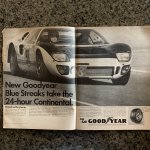 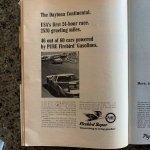 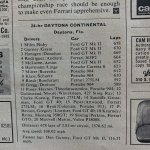 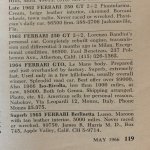 ByeEnzo said:
I also have a May 1966 Road and Track magazine that Lloyd Ruby signed. There’s a couple of ads with the #98 car. Classified ad in the back for a 250 GTO for 9 grand

That's killer. If someone would have thought to invest 12k in the gto and a 427sc, retirement would have been set.
G

Thanks for the tip. Cool stuff.

I must have that magazine somewhere.

I know my wife won't do it. She's been wanting me to get rid of those magazines for, let's see, 60 years.
Reactions: Button and ByeEnzo

I thought it was interesting that Gurney had the fastest lap at 116.51 mph..

Looking at the top 10 finishing teams...Miles, Hansgen, Donahue, Rodriquez, McLaren, Rindt all died in period. Also Revson. Had to have big stones to drive back then.

Great stories guys. This Heritage addition is a fitting tribute and a wonderful way to acknowlege Ken for his contribution to the GT program.
When a large group of us attended the 1st race of the New GT program at Daytona in 2016 I just happen to take a model of the 1966 winner to our forum event.
And for those who me.. yes I got signed
The clear outer case was signed by Henry Ford III, Raj and Dave Pericak